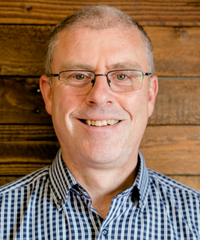 I grew up in Victoria, BC, the youngest of five children. I was born to parents who loved the Lord Jesus and though broken and imperfect, were devoted followers of Jesus.  I realized, as a young boy, my need of a personal Saviour, but really began to grow in my faith as a teenager after the death of my mother.

After high school I trained as a heavy-duty mechanic but also had a desire in my heart for people and seeing them grow in their relationship to the Lord.  Maureen and I were married in 1982 and first moved to Three Hills in 1989 to study at Prairie Bible College.  From 2009 until the summer of 2016, we served in Eastern Europe in a church-planting role in Albania and mission leadership in the Balkans.

I enjoy spending time with my wife, daughters, son-in-law and grandkids and am energized by people.  I enjoy the outdoors and helping people practically.  I love seeing people become devoted followers of Jesus Christ, as I believe He is the only hope for our turbulent world.